A short introduction to OBS

In the app itself, it has different capture modes which is useful for different purposes. For example, the Display Capture in the app allows you to capture the entire display, the Window Capture allows you to capture the specific window or app running on your computer, and the same with the Game Capture as well. Once you select which type of capture you need and add it to your OBS, you are good to go and start streaming.

This can be used in different scenarios, wherein you are in the showcase and want to share only the presentation to the audience, in that case, you can use the Window Capture and stream just the single tab to your audience. OBS makes it super simple for everyone to use the app & get started with streaming. And all of this can be done in a very few clicks and you are good to go.

But according to many queries on the OBS Forums, many beginners who are willing to get started have faced the common issue of Window Capture Black Screen. What this actually means is that even after you have added the Window Capture or Game Capture, that specific window appears as a black screen in OBS thereby even if you stream only the black screen is streamed. So, if you are wondering how to fix the Black screen window capture issue, follow the below steps and #StartStreaming.

How to fix the OBS window capture black screen issue? 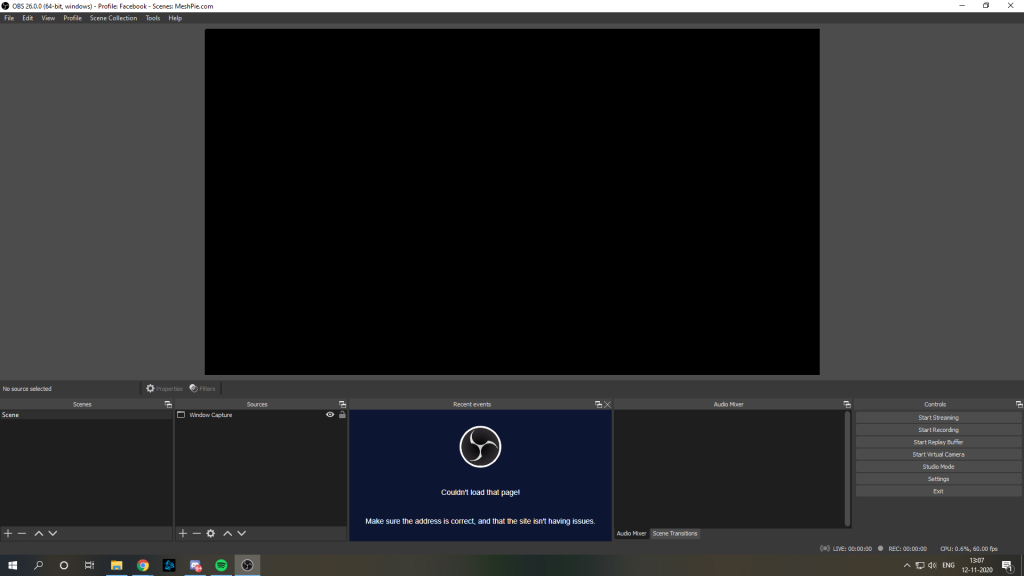 The Black Screen window capture OBS issue is that when users try to add window capture or game capture in their sources section, a black screen appears rather than the native source or window selected. If the issue still persists and you start to stream, it means the users will be able to see the black screen as you can see in the preview rather than the Window you desired to stream. To share your screen to your audience, you firstly have to fix the black screen OBS capture issue so the footage from your computer can be broadcasted to different platforms easily and seamlessly.

So, How to fix the OBS Window Captureblack screen issue? You’d wonder.

The Black screen OBS problem doesn’t have a fixed reason. It may be due to several reasons why OBS isn’t able to capture your window directly and why the footage isn’t being previewed in the app itself. Here are a few common hotfix for the OBS black screen issue :

We at #MeshPie have also curated the Top 5 OBS plugins that can help you take your streaming game to the next level. Check it out here – Top 5 Must Have Plugins for OBS Studio in 2020

If you have any doubts or queries regarding OBS or streaming, drop em down in the comments and we will be happy to help 🙂

Graphics Card Not Detected- 5 Best solutions to fix it!